TUBAn
THE MOST INTERESTING CHANNEL
IN THE WORLD

See the world from Red and Yellow’s point of view, and experience what a dangerous and exciting
place the world can be for such small friends. 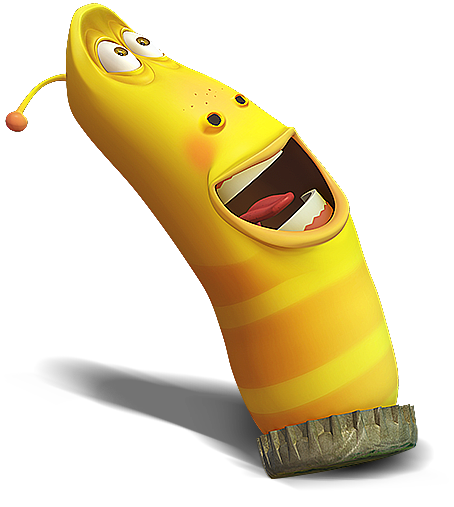 Red and Yellow, two strange Larva who live underneath a storm drain, encounter many surprises
which fall from the outside world to their underground universe. For these two wriggly friends,
anything is a good excuse for fun.

He is full of pride and easily irritated. Don't try to mess with him! He is always pulling mean jokes on Yellow,
but somehow finds himself in trouble in the end.

He seems like a pushover because he usually lets Red do whatever he wants to do,
but when it comes to food, he is a fighter!

An unusual little dung beetle that collects dung all day long. His no.1
treasure is his ball of smelly dung. The stinkier the better!

Violet is an unidentified giant bug. The bug usually shows only its head above the ground but when it’s stimulated and threatened, it pulls its entire body out of the underground and reveals its dreadful teeth.

Incredibly strong, Black is a beetle with a dreadful fist which shows Herculean strength.
He is like an older brother to Yellow and Red. He doesn’t bully the Larva unless he’s provoked.

It smells so terrible that no one dares to approach it. It wants to make friends but
is always lonely and depressed because no one approaches it.

The snail, Rainbow appears at times. It doesn’t look dangerous but the unidentified
liquid it sprays makes everything go slow.

Seems like a seed underneath the ground, but it comes out whenever it needs.
Since it eats up all of the bugs, it's every bugs' enemy. However it is weaker than Violet.